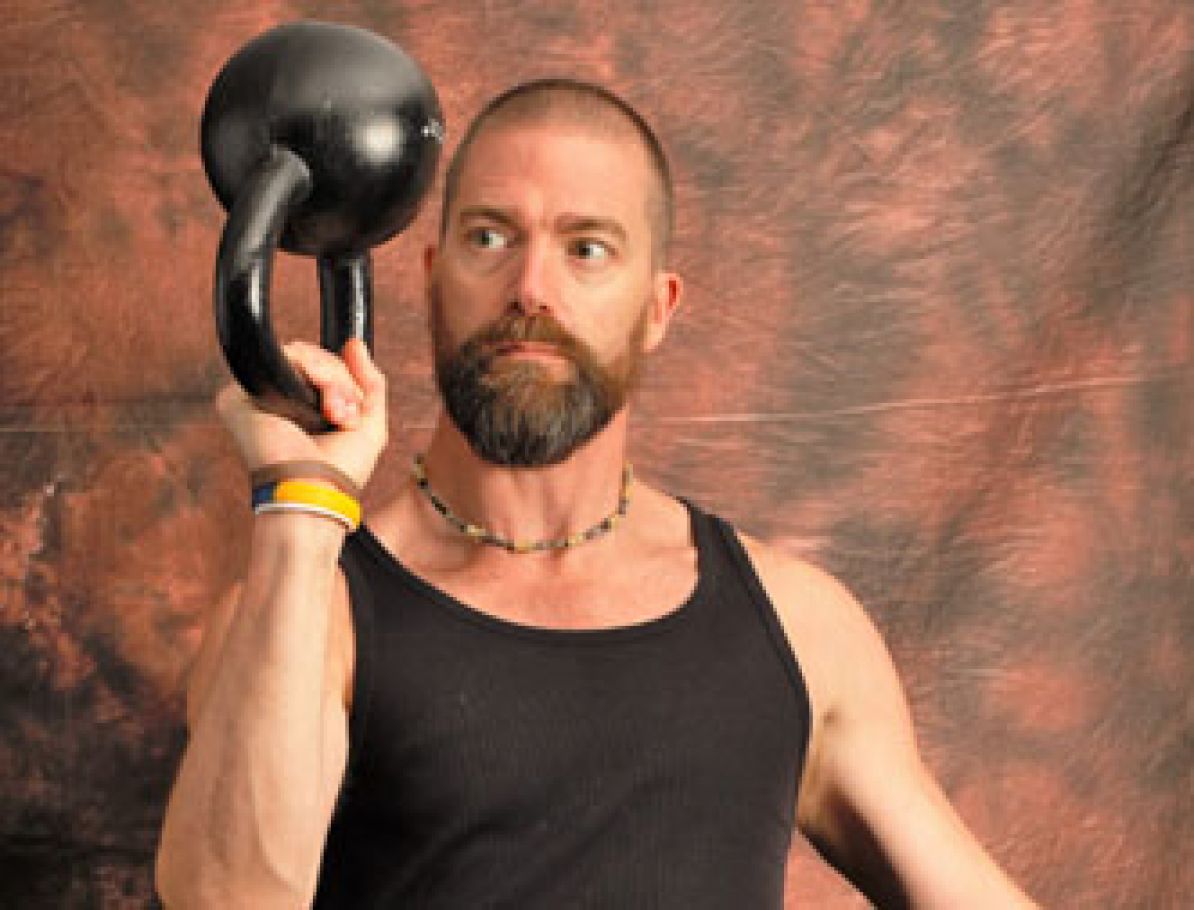 As a coach who both trains with and coach’s kettlebell exercise, I wanted to do some research so that I could confirm that what I believe to be correct dogma and application is backed up by scientific evidence. But I was disappointed to discover that this is not the case.

That isn’t to say that science has debunked kettlebell training either, this isn’t a case of black/white, good/bad, yes/no, etc. It’s just that not very much research has been done and what research is available is generally of fairly poor quality. Often, they use very small sample sizes, short training durations, questionable weight or exercise selection, EMG data which only measures muscle activation, not training outcomes or are simple N=1 experiments. That makes it very difficult to say with any real confidence that a certain kettlebell training protocol is better or equivocal to other similar training methods.

We know that there is a strong tradition of kettlebell training over the decades. Popular belief is that the Russian military have used kettlebells for over a century and that Pavel Tatsouline introduced kettlebells to the west when he moved to America in the 1990’s. But according to sports historian Victoria Felkar that may not be the case and kettlebells may date back further than that and not necessarily from Russia.

But I’m getting off topic. What I wanted to convey here is that some exercise modes are tried and tested and commonly accepted to be effective for certain outcomes. For example, the good old press up is a great exercise that everyone has tried at some point. It doesn’t take a raft of randomised control trials to prove that the press up works, we have all the anecdotal and observational evidence we need and, when combined with what we know about physiology and biology, it’s easy to explain why it’s so effective. The same goes for kettlebell training.

However, how do we know that 200 swings with a 24kg or 32kg kettlebell is an optimal prescription? We don’t we can only guess. Obviously if you did that every other day for three months you would almost certainly see some kind of improvement in muscular strength and power development because that’s how training works. Move weights, you place muscles under mechanical tension and said muscles get stronger. Move that weight quickly and you force adaptations in the muscles due to speed of contraction that results in better power output. We know that because science has confirmed this, but how do we know what the optimal set/rep/weight ranges are for doing that with a kettlebell? Don’t ‘know’ we only have a pretty good guess. However, there is a considerable weight of research to pul, from with regards to more ‘traditional’ forms of strength training. Just looking at this graphic by Strength Theory you can see a decent list of research into different weight/set/rep ranges for weightlifting. 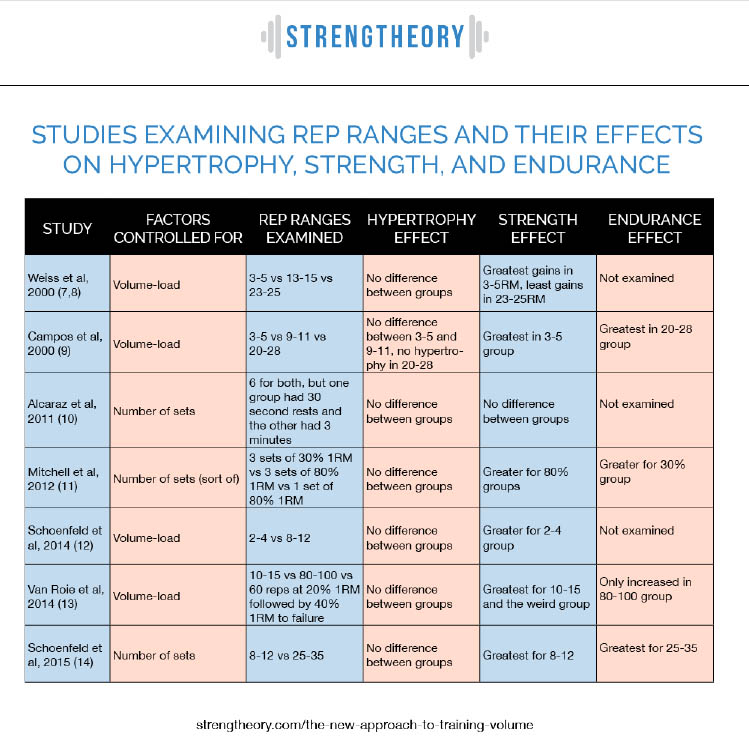 Based on these trials we now have a better understanding of set/rep recommendations for strength, hypertrophy and muscular endurance. The leading researcher on strength and conditioning currently is Brad Schoenfeld and it’s because of his research we know that low reps and heavy loads are superior for strength gain, and moderate weight higher reps are adequate for hypertrophjy (4) so a combination of heavy compounds and lighter isolations is probably ideal. Any bro can tell you that, but now we know that science confirms it. Likewise, we can now say with some confidence that body part splits, where you work each muscle once per week are inferior to push/pull training methods where you work each muscle group 2-3 times per week, because we have research to prove it (5).

If we use those facts and apply it to kettlebell training, then it’s highly likely that most kettlebell training methods will fall into the muscular endurance category. Sure, you can get super heavy kettlebells and maybe 5 x 5 dead stop swings with a 70kg kettlebell is an extremely effective way to develop strength and power and possibly equivocal to doing the same weight and set/rep ranges with a barbell Romanian deadlift. But until someone does a randomized control trial to test that we just can’t say for certain.

Kettlebell Research Review
So here’s the video that covers all the research I found. As I said, there is simply a dearth of good research. For example, this 2014 paper which is cited in the video clearly shows how sparse the research is. Only FIVE studies met the inclusion criteria and the conclusion is that kettlebell trainig lacks evidence (6). 5 studies inn a meta-analysis is awful. When you consider that the ISSN position stand on nutrition for body composition (3) cited 146 studies you can see how difficult it is to draw confident conclusions for just 5 studies.

If you look at the physique of someone who trains mostly with kettlebells you will notice that their body shape if different to someone who trains mostly with barbells. Your typical kettlebell trainer tends to have quite an athletic shape with what you might refer to as a wiry or “lean muscular” appearance, (I use ellipses here because technically all muscle is lean but hopefully you know what I mean) often quite well developed upper body with good muscular definition around the back and shoulders but often less girthy limbs than someone who maybe trains more like a power lifter. Powerlifters will likely have thicker legs and a deeper chest, or a bodybuilder who will definitely have larger arms. That should come as no surprise because the loads lifted and the overall volume on certain exercises will differ widely. The bodybuilder and power lifter will typically be much heavier and thicker set than the kettlebell athlete – I keep using the phrase thick, or thicker but I believe, in the parlance of our times, (#milennials) the word ‘thicc’ is preferred.

Anyway, this leads me to believe that kettlebells are neither optimal for strength or hypertrophy, although you definitely experience SOME strength gains and some hypertrophy, it’s just not comparable to training methods designed to optimise those outcomes, the key word here is ‘optimal‘. Again, that doesn’t mean that kettlebells are not a great tool to use. In fact I would argue; because kettlebells don’t illicit the same level of hypertrophy as other forms of resistance training, that makes them a good S&C tool for endurance athletes who want to improve strength and power but not necessarily increase their body mass.

But, as mentioned in the video, there is at least one trial that has shown kettlebells to be effective for countering the onset of Sarcopenia in the elderly (7). That matters because not everyone wants to join a gym and lift barbells, but if they could do a few squats and deadlifts at home with a 16kg kettlebell and see an improvement they might be more inclined to do so, but now there is evidence to support the theory. You see, evidence does matter. Lots of people claim that the Loch Ness Monster exists, but until we have actual evidence, we can only assume they are either mistaken, or, lying – I’m going with lying seeing as the most famous photo of Nessie has been found to be fake.

I mentioned Pavel Tatsouline earlier and I want to make it clear that I am a big fan of Pavel, just because he is clever enough at marketing to make you wrongly believe that he is the pioneer of kettlebell training doesn’t detract from all the good he’s done. Likewise, because he rarely ever cites evidence when talking about his training methods doesn’t mean that he doesn’t read research or apply it to his methods. I actually quite like his simplistic approach. Pavel is a big reason I train the way I do and why my clients also train with kettlebells. It’s not Pavel’s fault that there is a dearth of research on kettlebell training methods. There are a number of RKC training providers who have developed very sound training systems and approaches to programming that are, at the worst, safe and, at best, highly effective. So please don’t assume I am trying to attack anyone or call out Pavel, I’m not. I am merely pointing out a gap in exercise science that I would love to see filled in with a vast body of compelling evidence.

Kettlebell Training Template
If you have read this far you probably want something to take home so let me give you one of the common training templates that I personally use both for myself and my clients. This allows for development of mobility, strength/stability and power/aerobic capacity. You can make it very time efficient if you need to or you can increase the total volume or increase the duration of some exercises, it all depends on your goals.

Split the session into three mini circuits or supersets like so:

Find this useful? Then please do give it a share on social media.