Is Weight Training REALLY Good for You? 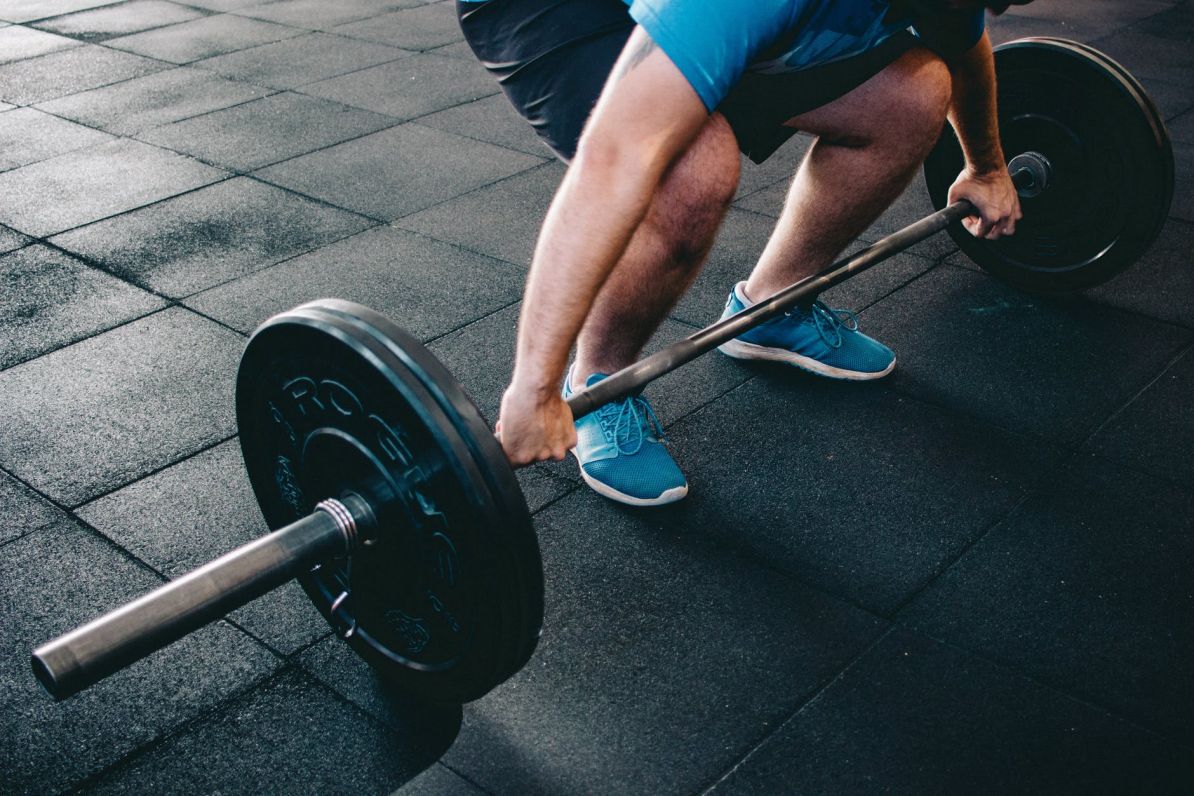 Everyone knows that exercise is good for them, but despite that too few people do much of it with any real consistency. Beyond walking to the fridge and back or angrily hammering the keypad on their mobile phone while taking part in some kind of pointless argument on social media. But the health benefits of exercise are incredible, to the point that it really ought to be a prescribed by doctors as a first line of defence against almost all forms of chronic illness.

But, the thing is the fitness industry doesn’t seem interested in selling exercise to you for health and longevity. It tells you that you need to punish yourself with high intensity plyometric exercises like the shiny, Lycra clad models on the fitness DVDs (who, by the way didn’t use 30-minute bodyweight cardio sessions to get that ripped). It’s fitness elitism, the message being if you aren’t smashing yourself to bits and finishing up in a pool of your own sweat you aren’t earning the right to eat your plate of dry quinoa and lettuce for dinner. You are such a useless piece of shit, what do you mean you can’t keep up with Shaun T? You shameless loser!

But, before marketing made a mockery of fitness there was one form of exercise that stood the test of time, that men had been doing for centuries in various forms and, thanks largely to CrossFit an increasing number of women are also getting into. What is that exercise form? Resistance Training (RT) dummy. Yep, lifting heavy things whether you are merely weight lifting or bodybuilding or doing something with a performance aspect to it like power-lifting, Olympic lifting, Kettlebell training, CrossFit, etc. But, even there, the fitness industry still wants to market resistance training for aesthetics. Which is fine if that sort of thing is important to you, but there is so much more to RT than just having bigger muscles and looking shiny in your smalls.

So, with that being said, here are a bunch of evidence-based reasons why resistance training ought not to even be an option for any human being who wants to be healthier.

Stronger bones and that

Age related decline is a major concern for ageing populations and one aspect that has worried mankind for centuries are the conditions Sarcopenia and Dynapenia which are muscle wastage and weakness. These conditions have been assumed to be a natural aspect of getting older and that there was little one could do about it. But, there is something you can do about it. You can lift weights. There is new evidence all the time that progressive RT is responsible for significantly limiting the effects of this age-related strength decline (1,2). Simply training the full body, to incorporate all the major muscle groups, for 30-60 minutes 2-3 times per week is adequate. Think about that for a second, 2 or 3 short gym sessions per week could change the life of an elderly person.

Further, bone mineral degenerative disorders like Osteoporosis are shown to be improved through weight bearing exercise. Now, aerobic exercise, running in particular, which provides an impact stimulus are shown to be effective, but no other form of exercise seems to be as effective for increasing bone density as lifting weights (3).

It stands to reason that if you are fit and active your body will be stronger but using progressive resistance training will 100% protect against age related decline. Even if you have never done it before and are now at that age where you have retired, have more time on your hands but aren’t in the best physical condition. Get yourself to a good quality personal trainer, coach or strength centre and start lifting weights, you’ll get a lot more out of your advancing years and you’ll be eternally grateful when you can keep up with your grandkids while your peers hobble around with their Zimmer frames.

Type ii diabetes is often termed ‘adult onset diabetes’ because it is brought about by poor lifestyle choices. A person who leads a largely sedentary lifestyle, eats a poorly balanced diet, both in terms of nutritional density and caloric balance, and who leads a high stress lifestyle may develop T2D. Diabetes is a metabolic illness where the muscle mitochondria lose efficiency.

Mitochondria are the tiny cells in the muscle which create muscle contractions, you can think of them like the mini cells on a solar panel. If the smaller panels, or cells, start to fail eventually the entire solar panel fails and consequently so does any appliance getting it’s energy from that source. So, using that analogy you can see how important mitochondria are to the healthy physiology of a human body and why mitochondrial dysfunction can lead to chronic illness.

A 2017 review of data (4) showed that resistance training led to positive changes in lean mass, mitochondrial adaptation and insulin sensitivity which could be an effective defence against the disease. Endurance or aerobic exercise are also useful, but the researchers showed that there may be an inverse relationship between aerobic exercise and Metformin use that doesn’t appear to occur with resistance training.

In other words, if you are metabolically unwell, getting yourself stronger and leaner will help make you metabolically healthier and, in conjunction with a well-managed energy restricted diet and stress management protocols, you may even be able to completely reverse the condition.

We all know that if you need to lose weight you need to do LOADS of cardio right? Walk more, get running, buy a celebrity workout DVD and do a bunch of HIIT training, right? Nah! I'm sorry to break it to you but Joe Wicks is wrong.

I mean, yes, cardiovascular exercise is very good for you,. But, something that everyone who wants to lose body fat should be doing (which makes perfect sense when you think about it) is attempting to increase the amount of lean mass they have, or at least ameliorate the rate of lean mass loss during a Calorie deficit. More muscle means better metabolic health means easier fat loss.

A recent review (5) examined at a vast number of studies looking at the effects of resistance training on obese youths. Unsurprisingly it showed that inclusion of RT led to increases in lean mass, reductions in body fat percentage but little change in body mass index. But of course it didn’t! If you want to lose fat you need to be in an energy deficit and that is where diet comes in, controlling the Calories in part of CiCo, but the mere fact that these children lost SOME fat while increasing skeletal muscle is a major positive.

Sure, aerobic exercise will burn more Calories and assist body fat reduction more directly, but RT indirectly assists fat mass reduction by inducing an increase in metabolic rate due to increased lean mass (6). But, it also appears that resistance training helps to reduce visceral fat as well (7). Visceral fat is the fatty deposits that form around your organs. High visceral fat levels are more predictive of serious health outcomes even than subcutaneous body fat.

When I used to teach group exercise I often used to shout out the usual dumb fitness clichés like “no pain no gain” of “pain is weakness leaving the body”. I never really agreed with these, but they used to amuse me. Fast forward to 2018 and one of my main areas of consideration is corrective exercise, especially for lower back pain. So, the question is, will lifting weights make your back worse?

Of course, I have already researched this as part of my Back Pain Solution online program. Would you be surprised (given the tone of this blog) that resistance training is actually really good for back pain? One of the reasons some people get back pain is a combination of laxity in the lower back and muscular weakness. Essentially being able to create core stiffness to stabilise the lower back is important. But, aside from doing targeted core exercises to achieve this (see this blog) is there any real benefit to lifting weights if you have a ‘bad’ back? I mean, won’t it hurt?

Recent research into the mechanisms of chronic pain show us now that a large aspect of it is psychological. This is known as pain catastrophising. A 2014 study took two groups of obese mature (60+) individuals with chronic back pain and split them into two intervention groups. One group did a generic lower back stretch routine while the other group were prescribed a total body resistance training program using typical gym machines (8). After 12-weeks the resistance trained group reported significant reductions in perceived pain, pain catastrophizing and self-reported disability scores. Far better than the control group who only reported a reduction of pain while walking.

Another study looked at younger active individuals using free weight exercises based around squats and deadlifts (higher intensity loading upwards of 75% of 1 rep max) and saw reported reductions in both pain and disability of 72% and 76% respectively (9).

So, the answer here is, no lifting weight isn’t bad for your back, it’s almost certainly good for your back. Technique and quality of movement are important though, and there will be some cases where spinal loading could increase pain, so just be mindful of such things and if you are uncertain, get yourself assessed by a pain specialist.

So, I’ve covered weight loss, metabolic health and back pain, what about mental health? Guess what? It turns out that resistance training is pretty good for reducing depression and anxiety in sufferers too.

A recent paper looked at a large sample group (1,870 people) and showed that resistance training had a significant effect on reducing depressive moods, regardless of health outcomes (10). It also appears that lifting weights reduces feelings of anxiety both in sufferers and non-sufferers (11). So yes, it does appear that lifting weights makes you happier.

We know that exercise increases the secretion of brain serotonin levels which actually lasts for a while after exercise (12). So, it stands to reason that exercise will make you feel temporarily better. Further to that there is a progressive aspect to weight training that brings with it a sense of meaning and achievement. Not to mention the fact that getting jacked makes you both look good and feel better about yourself. No wonder the Asian Journal of Sports Medicine conducted a large clinical review of evidence to give practitioners guidelines on prescribing exercise as a clinical intervention for mental health sufferers (13).

Lift weights it’s really good for you. It makes it easier to lose body fat, to get stronger, to protect your bones from fractures and age-related degeneration, it makes you look better, feel better and can even change your experience of chronic pain.

What kind of kind of rep ranges should you be aiming for? That depends on your goals. Remember, the number of reps should relate to the load on the bar, so a strength range of 1-6 reps should be at around 90-100% of your one rep max, while a hypertrophy range of 8-12 would be around 70-85%. Here's an example template of what a linear strength program might look like: 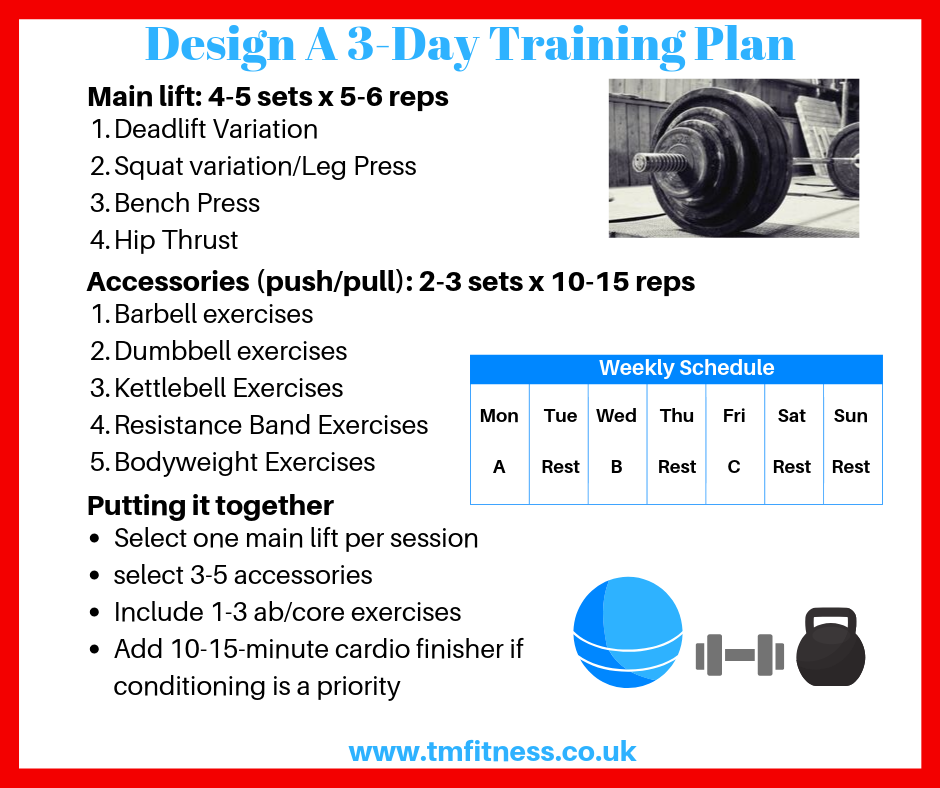 Yes, EVERYONE should be doing some form of resistance training and if you aren’t already doing it you should start as soon as possible. Get yourself a trainer or coach or join a strength and conditioning centre or CrossFit box and get lifting.

Alternatively you could pledge your support to TM Fitness on Patreon and join the Athlete tier to get exclusive exercise content each month.